Welcome to our little RPG community!

Here we will list the rules we will use for our open D&D 5E games
on Friday evenings at Café 1070.

All officially released resources such as printed books (like PHB, MPMM, ERLW, MOT,
VRGR, XGtE, … ) and material officially released for Adventurer’s League (like ALCoS, ALEE, ALRoD, …) are allowed. You can use stuff from all these resources without restriction.
You cannot use playtest material (such as Unearthed Arcana), homebrew and 3rd-Party materials.

When leveling up you don’t roll Hit Die, use the fixed value shown in your class entry instead.

All Races with flying speed have the following ability instead as long as they are Tier 1:

Glide.
You can glide or slow your fall. When you fall and aren’t incapacitated, you can subtract up to 100 feet from the fall when calculating falling damage, and you can move up to 2 feet horizontally for every 1 foot you descend.

Custom Lineage characters are not allowed to pick any Feat, that would grant an increase to an Ability Score as their Bonus Feat gained at Level 1 (e.g. the “Telekinetic” Feat).

Backgrounds that would grant Feats and/or add Spells.

In V.A.L.U.E. Backgrounds neither grant Feats nor Spells. You are allowed to acquire the Feat when you reach an Ability Score Improvement per usual, even if that Feat would normally be restricted to be acquired by getting the Background. You still are allowed to pick a Background, that would grant Feats and/or Spells, but you would only benefit from that Background’s other Features.

Tables like "This Is Your Life" (from XGtE p61ff) and "Heroic Chronicle" (from EGW p190ff) may not be used.

The Spell silvery barbs is banned.

Your character can be any Alignment, but please keep in mind that your character should still be
able to work in a group. Basically that means the party you are traveling in is always assumed to be working together and even a mismatching alignment will not get into the way with party interactions.

To generate your character’s Ability Scores, we still use Standard Array or Point Buy, but we increase the limits on point buy. You’ve got a total of 27 points to invest into the 6 Ability scores utilizing the following table: 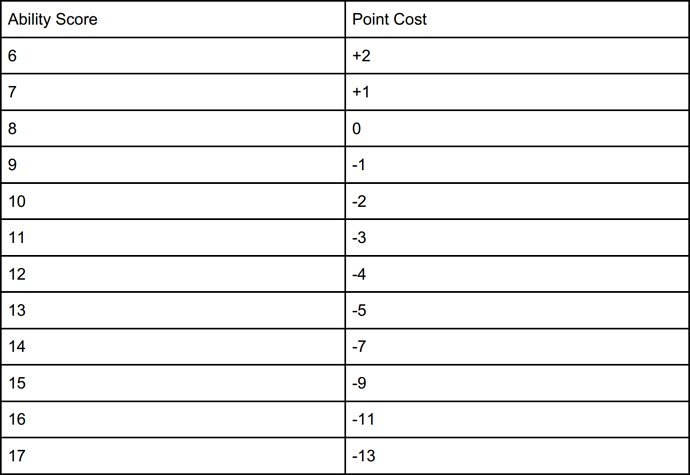 Characters at starting Level 5 or higher, begin with one (or even more) magic items from the following “everygreen magic item lists”.

At Level 1 you get the equipment your Class and Background provides.

should you generate a character at higher level, you gain extra Gold as listed below:

Before your character goes to their first adventure, as well as between adventures, your character is allowed to purchase any item listed in the Player’s Handbook with their (starting) money.

Since this will be a new V.A.L.U.E. season … we will do a Character-Reset.

This means that ALL our old characters from the previous season(s) will be gone.

Additionally you may create (or re-create) ONE single character, up to the highest Level of any character of you had in the previous season(s).
This ONE character of yours also gains extra Gold as listed below:

The Character-Reset affects every character played before Friday 13th of May 2022.

You gain a level at the end of each adventure, at your discretion. If you’d like to continue playing at your current Level, you can decline to gain a Level. You still keep any other rewards earned.
You gain hit points listed as the fixed value for your class (plus any modifiers) when you level up.

Whenever your party finds treasure of a monetary value, they can keep it with them to use during play. Any remaining treasure unused at the end of the adventure is converted to gold pieces and divided (evenly) between all of the characters. The Dungeon Master can assist in this process.
Mundane items, such as found equipment, are divided however the party chooses at the end of the adventure.

Sometimes you and others in the party may earn a Story Award. This is a special award or item, sometimes presented as a certificate, that may have significance in future adventures in the same storyline. Whenever applicable, the DM may ask if any of the characters in the party possess a Story Award. In certain circumstances, such as the case of story items, the party may have to determine who has it for the purposes of that adventure.

Your character may brew one item from the list below for 5 Downtime Days each. This does not cost your character any gp. Be aware that potions of healing still count towards your character’s consumable magic item limit.

You character may spend 10 Downtime Days to gain one Level.

If your character can copy spells, you may use the rules presented in the “Your Spellbook” sidebar in the Player’s Handbook to copy spells found in adventures, except it costs 1 Downtime Day for each spell up to 4th level and 2 Downtime Days for each spell 5th level and above. If you are copying spells from another character’s spellbook, you may do so immediately after an adventure in which both players were present and agree to do so. You are always successful at copying spells from scrolls.

Your character can get rid of a disease between adventures for 10 Downtime Days.

Your character may scribe Spell Scrolls of Spells that your character knows, for the listed Downtime Days & gold cost below. Scrolls scribed count towards your consumable item limit. Your character must have the Material Components of that Spell, if there are any. Should the Spell have consumeable Material Component with a Gold cost, the gp cost for you to spend for scribing that Scroll would increase by that amount.

Note that granted Story Awards only work at a table with this DM, or in a game of the same story arc, that is a coproduction of this and another or several DMs.

This allows you to get cast a single spell on your character from the following list after an adventure for 10 Downtime Days as well as spending the Gold price listed below.

Whenever your character trades a magic item, both characters involved have to spend 5 Downtime Days each. Trading permanent magic items with other characters is on a one-for-one basis of equivalent rarity. You can only trade with the characters of other players. Unique magic items may not be traded.

Your character can get 2 gp per Tier for 1 Downtime Day used between adventures (e.g. a Level 14 character would gain 6 gp per Downtime Day).

You can run any adventure you want … be it AL, DM’s Guild, or Homebrew. Keep in mind that the Tier of your game should match the Tier of your players. Should you have questions regarding what to run, feel free to ask us in the #dm channel of the RPGVienna Discord.

Please keep in mind that characters will be able to keep the gold they find and/or get paid, up to a certain limit per session depending on their Tier listed below.

Drop Max. One Item Per Game

You are allowed to drop ONE Non-Consumeable Magic Item in your adventure, that every character, who survived, could "pick up" after the game.

The Tiers of magic items are as follows:

You can give out Story Awards, even “homebrewed” ones.

As a DM-REWARD for dm-ing an adventure at V.A.L.U.E, you may choose one of the following options (not both). Should you have multiple DM-Rewards, you may choose a different option for each of your Rewards:

DM-REWARD Options
choose only one

should you choose the Level increase that character also gains Gold as listed below:

Should you inquire “quick answers to quick questions” you could seek us out at Discord.