This monday’s got me sweating! But not as much as my players will be this friday

I will offer a t1 , 2 game based on the players we have. If I get some people from my last session you may or may not explore the continouation of the madness you caused. See you there!

Item unlocks and their tcp cost can be found here.

(not gonna DM a game, don’t wanna prepare one. too lazy)

[rpnuj9zdio541] The V.A.L.U.E. of Ravnica Styles: urban-adventure, investigation, exploration, intrigue Ravnica is an ecumenopolis - t.m. the whole world is a single city (e.g. like Coruscant in Star Wars), that draws inspirations from a late-medieval Prague. It is divided in countless of Districts and those further in Precints. Ravnica is ruled by 10 Guilds, who swore a mystic “Guildpact” over 10000 years ago, to stop an epic civil war. The fragile peace held till now, with a short exceptio…

I should be able to make it again this Friday, to continue my tier 1 druid (lvl3).
Next Friday I won’t be able to, since I’ll have night shift at work…

I hope to be there for one last hurrah as a player in Vienna. I will have T1, T2 or T3 characters available for hijinx, shennanagans or mishchief

Gonna be there as a player, creating a new character from scratch. Looking forward to it!

I’ll be there to

After I couldn’t make it last week I would be happy to join this Friday.

I have (can make) T1/2/3 characters and also just to be sure I prepare one for @Darthbinks table.

Don’t think I’ll be able to make it this time round. Maybe next week…

I’ll probably be there and join @Darthbinks in his adventure

I’ll be there and bring along a fresh face (some DnD experience, not a noob, not a veteran)!
As such, T1 would be the only option for us, as she has never played in VALUE and will have to start at LvL1. I hope some table will have us

the stuff I will dm are more independant one-shots, that take place in the same setting
(Ravnica’s 10th district)
recurring npcs & slight foreshadowing => yes
it is a campaign => no

so choices of the players will influence later adventures and adventurers,
but it won’t matter at all, if those were the same adventurers or not

as an example:
-> In the first adventure a charming, but tyrannical, prince has been captured by a hungry dragon:
Did the prince die and the heir to the throne is now a 6 year old brat? Did the first group rescue the prince? Has he been disfiguered by dragonfire during the combat? Is the dragon still alive & hungry … or is she content and well fed now? If the dragon died … what does that mean for the kobold cultist, who worshiped her as a god?
-> In the running up adventure PCs are now on guard duty to protect a caravan of a princess from a neighboring country, who should marry the eldest son of the local king …

Awesome! We are game for anything. Besides, oneshots are perhaps the most comfortable way to get the feel for a new character anyway

I shouldn’t say anything… my brother just called and told me that he can’t drive me tomorrow so unless someone is coming from Stockerau I won‘t be able to come after all.

I’ll be there - if there is space remaining in @Darthbinks Ravnica-stravaganza I would like to join.

if you have questions regarding your character or the game, feel free to post or pm me 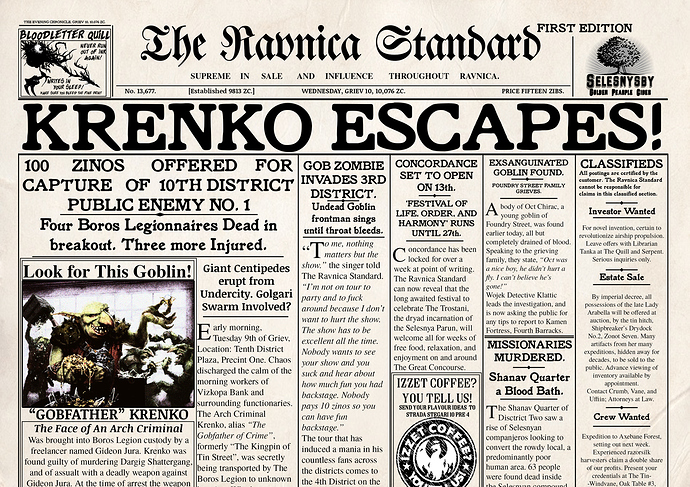 see you tomorrow
(I will try to show up early)