V.A.L.U.E. a little mystery and slaughter?

I should be able to be there this friday so I figured I’ll just start the thread this time.

I’ll have a highish T1 low T2 adventure (recommended levels for characters would be 2-5, but I can accomodate 1-6 easily enough, just know that it will be potentially deadly for 1-2) prepared for it (prepared meaning I have a story and a couple encounters in my head that I did turn into an adventure previously, so I figure I can do it again)
I might also pack a T1 or T2 character to bring along in case we have too many DMs and not enough players (I know I know … how likely is that really?

)
That being said, my adventure will likely be “unique” even though I have run something based off the same ideas before for the joint campaign we have going on in one of the discords. People that have been there for “A Slavers Remorse” might still want to play at a different table though.

My plans are that I’ll be there early (~18:00ish) as usual, in case somebody has questions, needs help (preferable with D&D related things) or just wants to shoot the shit.

Item unlocks and their tcp cost can be found here.

[rpnuj9zdio541] The V.A.L.U.E. of Ravnica Styles: urban-adventure, investigation, exploration, intrigue Ravnica is an ecumenopolis - t.m. the whole world is a single city (e.g. like Coruscant in Star Wars), that draws inspirations from a late-medieval Prague. It is divided in countless of Districts and those further in Precincts. Ravnica is ruled by 10 Guilds, who swore a mystic “Guildpact” over 10000 years ago, to stop an epic civil war. The fragile peace held till now, with a short excepti…

You would be surprised we had a lot of dms lately.

I can bring anything from 1-2 as both adventurers and player characters and will also be there early for hanging out purposes. See you!

I will join if you are OK with total noobs there. Will build a charachter of lvl1 with Ravnica Guild background and try to do my best I guess

I will join the meeting with a t1 or t2 character. So I’m flexible

I think I should be able to make it. Happy to play on any table. (Only have T1 characters atm - can make one with ravinca background as well)

Will be my first game with people from this forum, hope i can join a T1.

Hey! Do you still have space for one more? where would this be?

Still plenty of space!
Totally forgot to add the location, that situation is now rectified and the location is posted in the start of the thread (Burggasse 68, Cafe Zehnsiebzig)

I’ll be there and would like to continue @Darthbinks table in Ravnica.

I would like to join too, preferably at your Ravnica table

I’ll be there too and join @Darthbinks Ravnica table again

how’s it going? I recently discovered this forum and saw there’s actually something going on this Friday, still a seat free?

cool, thanks for the quick response

so I’ll pop by @6 then! anyone i should be asking for once I’m there? or a puzzle to solve or anything?

you’ll figure it out

I too would be on for another episode of @Darthbinks Ravnica

the maximum amount of players my brain could handle would be 5
those that joined me last week
including @BufoBufo, @healywp, and @joeder
have a “premium seat” reserved ^^ 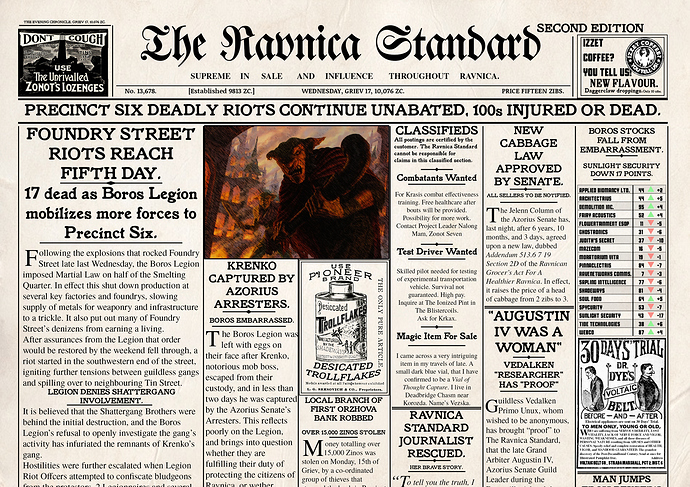 Great! Ill be there then! is there something I should bring?