The list of upcoming subclasses from the Xanathar guide

The list of upcoming subclasses from the Xanathar guide… 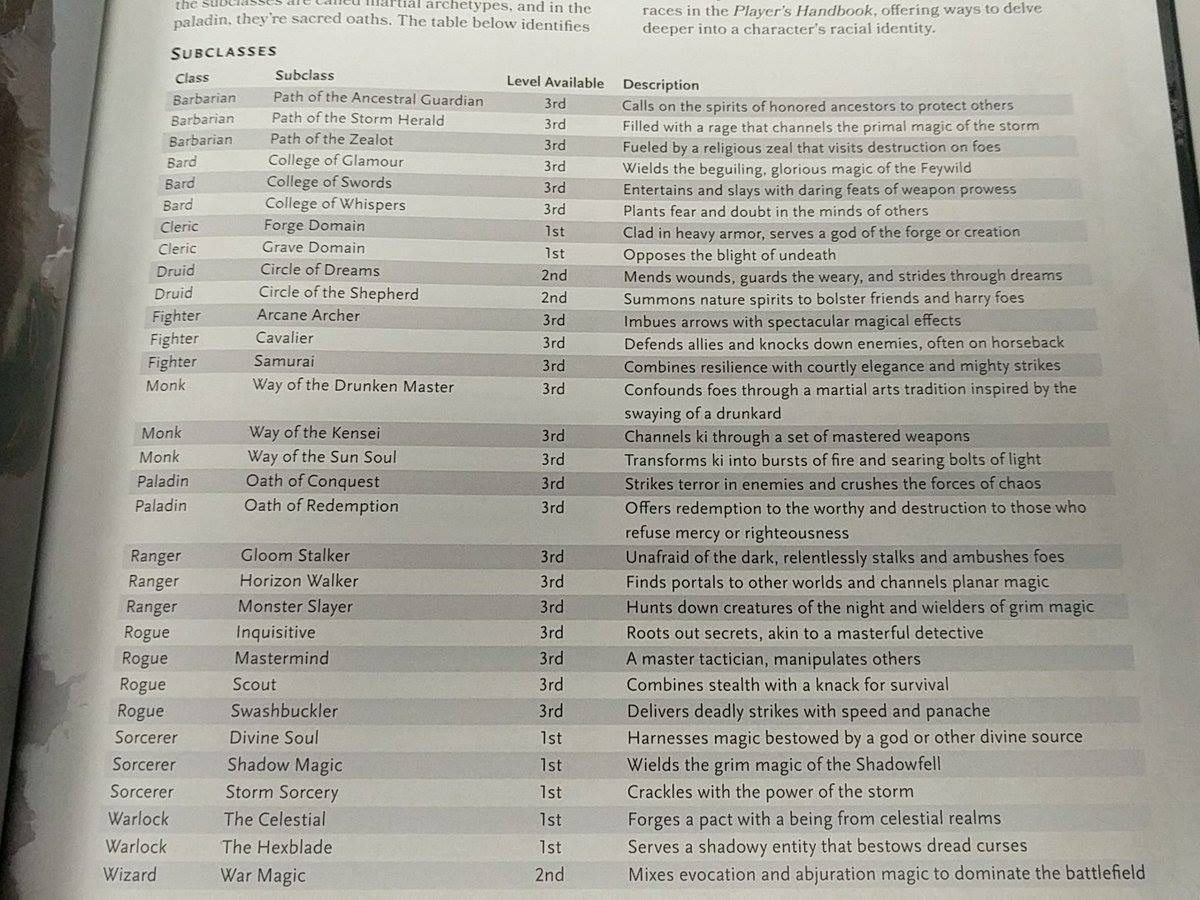 ok so most of them are from UAs, but Storm Sorcery for Sorcerer actually already has been release in the Sword Coast Adventurer’s Guide, same goes for Rogue Mastermind and Swashbuckler

i’ll still check it out obviously, and i’m curious wether those rereleased stuff will be changed or not

I don’t think so, the idea is for people that would not be interested in the Sword Coast to have another book that they can buy rather than being compelled to buy a whole book for just a subclass or two…

probably, still will buy as i’m using many of these options from the UAs and therefore feel wizards deserver the money for it

I will definitively buy it because I NEED TO BUY EVERYTHING!

I might build a Paladin around the Oath of Redemption. I’ll be a Knight of the Cross! But only if I can have Butters’ sword.

I like the Sound of Way of the Drunken Master Monk myself.

Seems like it, although you don’t automatically get an animal companion

Aye, exciting. But wouldn’t it be even nicer, rather than having a plethora of subclasses, if there would be themed plug-ins for all (or the seemingly appropriate) of the classes? For example, there are already storm barbarians and storm sorcerers, shadow monks and shadow sorcerers, arcane fighters and arcane rogues. Heck, UA-wise they didn’t even know at first, if the scout subclass should be attributed to the fighter or the rogue. IMO all this excessive subclass grafting goes against their easy-2-play philosophy and reminds me a lot of 3.5e. A little more versatility and thinking ahead in core game design would have saved a lot of paper and would make 5e a more adequate roleplaying tool. Why not a monk scout, or a paladin monster slayer, without having to dip into other classes? At least a mechanic to tinker an existing subclass to fit other core classes would be cool. Just my 2 cents.

I feel for you brother. The current 5e core ranger is quite the “Baustelle”. Even the revised UA version leaves much to be desired. A year ago or so, I even tinkered an imperfect Ranger core-class fix myself. Of what I have seen until now from Xanathar’s Guide, I don’t think an Aragorn-esque ranger type will be available soon for the D&D 5e canon. :-/