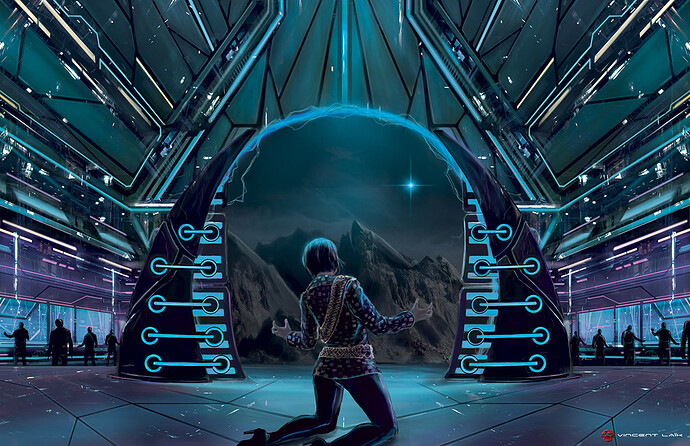 Thanks for playing the episode

A Star Beyond The Stars

will definitely gm more Trek adventures in the future … ^^ 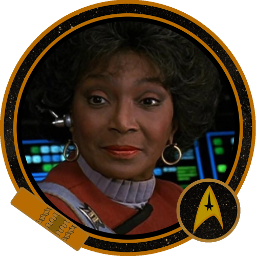 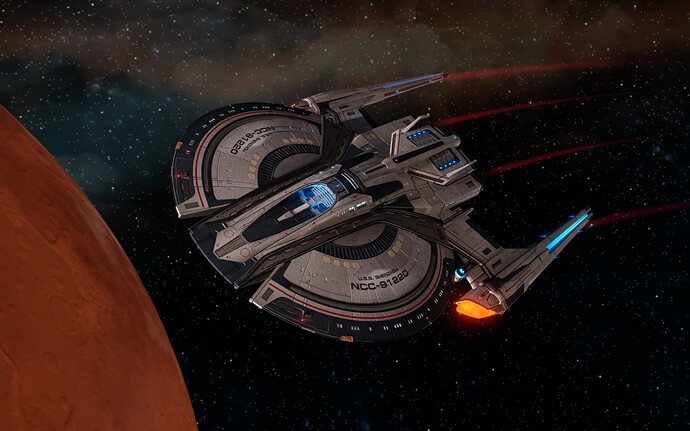 Improved Hull Integrity
The ship’s hull has been reinforced to hold together better under stress and damage. The ship’s Resistance is increased (already included).

Improved Warp Drive
The ship’s warp drive is more efficient, capitalizing on improved field dynamics, better control of antimatter flow rates, or some other advancement that allows the ship to expend less energy when travelling at warp. Whenever the ship spends power to go to warp, roll 1 for each Power spent; for each Effect rolled, that point of Power is not spent.

Modular Laboratories
The ship has considerable numbers of empty, multi-purpose compartments that can be converted to laboratories as and when required. At the start of an adventure, the crew may decide how the modular laboratories are configured; this configuration counts as an Advantage which applies to work performed within the laboratories.

Rugged Design
The ship is designed with the frontier in mind, with a durable construction and easy access to critical systems that allow repairs to be made easily. Reduce the Difficulty of all Tasks to repair the ship by 1, to a minimum of 1. 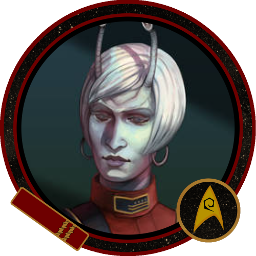 Value: "Duty unto death."
Value: "I can tell when you are lying."
Value: "People are more than flesh and blood."
Value: "Proud daughter of Andoria."
Directive: “Peaceful Contact with a New Alien Species!”

When the operations manager succeeds at a Task assisted by the ship’s Computers or Sensors, or using a tricorder, the character generates one bonus Momentum, which may only be used on the Obtain Information Momentum Spend.

Bold: Security
Whenever you attempt a Task with Security, and you buy one or more d20s by adding to Threat, you may re-roll a single d20.

Proud and Honorable
Whenever you attempt a Task to resist being coerced into breaking a promise, betraying your allies, or otherwise acting dishonorably, you reduce the Difficulty by 1.

Telepath
You can sense the surface thoughts and emotions of most living beings nearby, and can communicate telepathically with other empaths and telepaths, as well as those with whom you are extremely familiar. The character cannot choose not to sense the emotions or read the surface thoughts of those nearby, except for those who are resistant to telepathy. It will require effort and a Task to pick out the emotions or thoughts of a specific individual in a crowd. Unwilling targets may resist.

The Ushaan
You are experienced in the tradition of honor-dueling known as the Ushaan, having spilt much blood upon the ice. When you make a melee Attack, or are targeted by a melee Attack, and buy one or more d20s by adding to Threat, you may re-roll the dice pool for the Task. Further, you own an Ushaan-tor, a razor-sharp ice-miner’s tool used in these duels. 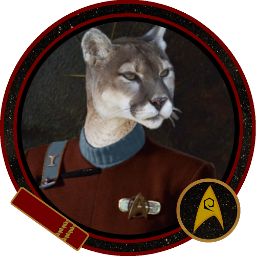 Value: "Duty unto death."
Value: "I can tell when you are lying."
Value: "People are more than flesh and blood."
Value: "Proud daughter of Andoria."
Directive: “Peaceful Contact with a New Alien Species!”

When aboard the ship, the chief engineer always has the Advantage “Engineering Department” , which represents the ship’s complement of engineers and technicians.

In the Nick of Time
Whenever you succeed at an Engineering or Science Task as part of an Extended Task, you score 1 additional Work for every Effect rolled.

Percussive Maintenance
You have an extensive repertoire of quick fixes, crude bypasses, and other improvised techniques for using and repairing devices during a crisis. They all do the job, but it’s messy work. When you attempt a Control + Engineering task, you may add 2 to Threat to use your Daring instead of your Control. If you do this, and the task succeeds, you may reduce the time taken by 1 interval without spending Momentum.

Prehensile Tail
While most Caitians have some functional control over their tail, characters with this Talent have worked to increase their control over the appendage to the point of it becoming fully functional. This provides the character with the ability to hold and operate an additional piece of equipment, like an additional hand. In addition, the character gains a bonus d20 to any Fitness Test to maintain balance or to climb. 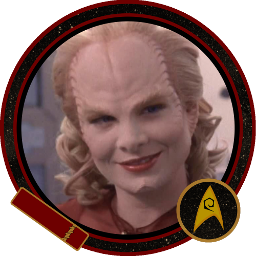 Value: "Love is a many-splendored thing."
Value: "Safety in numbers."
Value: "Voice of an angel."
Value: "You must learn to embrace new ideas."
Directive: “Peaceful Contact with a New Alien Species!”

When a Task attempted by the communications officer is increased in Difficulty because of an
unfamiliar language or encryption, ignore that Difficulty increase.

Cold Reading
Succeeding at a Task during Social Conflict generates one bonus Momentum which must be used for the Obtain Information Momentum Spend to gain knowledge about an individual on the other side of the interaction. If the Social Conflict involves an Extended Task, the character gains the Scrutinize 1 benefit when rolling Challenge Dice.

Cultural Flexibility
When you attempt a Task to learn about an unfamiliar culture, or to act in an appropriate manner when interacting with members of such a culture, you reduce the Difficulty by 1.

Psychoanalyst
When you use the Medicine Discipline during a Social Conflict you may increase the Complication range of your Task by a number of steps. For each step you may ask a single question as if you’d spent Momentum on Obtain Information. Complications generated from this Task results offend or upset others, because they feel being “analyzed.”

Untapped Potential
The character is inexperienced, but talented and with a bright future in Starfleet. Whenever the character succeeds at a Task for which they bought one or more additional dice with either Momentum or Threat, they may roll 1 Challenge Die. The character receives bonus Momentum equal to the roll, and adds one point to Threat if an Effect is rolled.

Value: "Better to have loved and lost."
Value: "Living with the ghosts of war."
Value: "The drive for exploration."
Value: "We are stronger together."
Directive: “Peaceful Contact with a New Alien Species!”

Cautious: Command
Whenever you attempt a Task with Command, and you buy one or more d20s by spending Momentum, you may re-roll a single d20.

Follow My Lead
Once per scene, when you succeed at a Task during combat or another perilous situation, you may spend two Momentum. If you do, choose a single ally. The next Task that ally attempts counts as having assistance from you, using your Presence + Command. 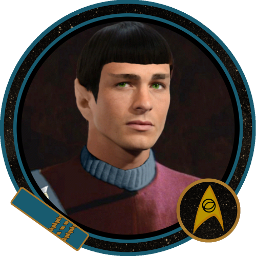 Value: "Hands of a surgeon."
Value: "The needs of the many outweigh the needs of the few, or the one."
Value: "When logic fails to provide answers - do nothing."
Value: "We do not lack emotions; We only suppress them."
Directive: “Peaceful Contact with a New Alien Species!”

When aboard the ship, the chief medical officer always has the Advantage “Medical Department”, which represents the ship’s medical personnel.

Calm and Logical
You are a highly rational individual, with a disciplined mind that can set aside your feelings to view things as objectively as possible. You may still have to deal with those feelings later, however. When you would gain a trait or complication which represents a mood or emotional state, you may immediately remove that trait by adding 1 to Threat.

Doctor’s Orders
When you use your authority as a doctor and attempt a Task to coordinate others, or to coerce someone into taking or refraining from a specific course of action, you may use your Medicine Discipline instead of Command.

I’m a Doctor, Not an Engineer!
Once per adventure, before attempting a Task using Engineering, a point of Determination may be spent to substitute the character’s Medicine Score in place of Engineering till the end of the scene.

Nerve Pinch
You have learned numerous techniques for the stimulation and control of nerve impulses — collectively called neuropressure. Some applications of neuropressure can be used to swiftly and non-lethally incapacitate assailants. You may use Medicine instead of Security when attempting a nerve pinch Attack. 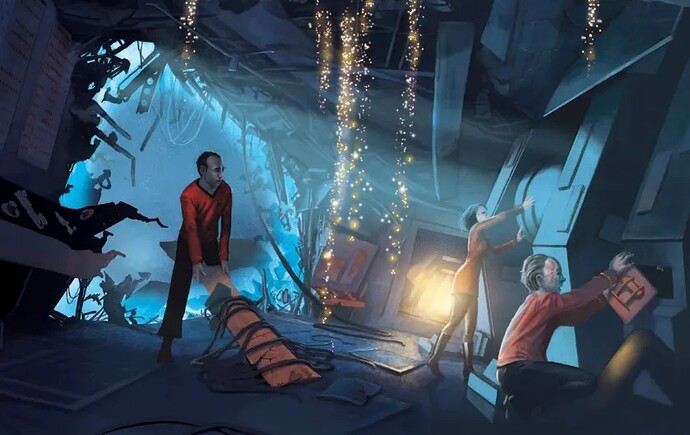 Thanks for playing the episode

somewhen down the galaxy there will be a Klingon game … ^^