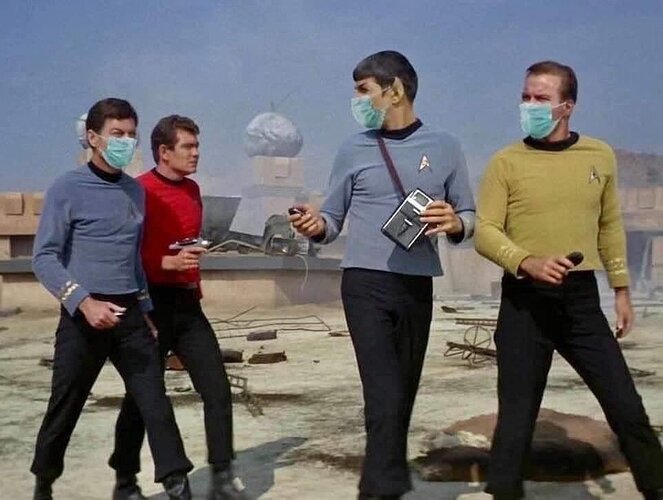 I could dm the scenario online on a Sunday afternoon, or at Café 1070 on a VALUE Friday (just keep in mind you will neither get advancement nor TCP for this^^)

also please state would you prefer the game to be set during the Original Series (Kirk; 2269), or the Next Generation (Picard; 2371) era?
(if there is demand I could also dm for a Klingon crew instead)

I would be certainly in. I would prefer ST:NG era but ST:TOS or Klingons would be fine, too.

I don’t know a lot about Star Trek but I’m certainly interested. I’m in.

Haven’t played Trek yet, but I’ve heard good things. Count me in, please!

Long live and prosper for The Original Series! Only with * khm * “high quality acting”, people flying around a table/screen in case of collisions and swooshing spaceships in vacuum!

(I agree with Patrick, I prefer the New Generation to watch, but I’m pretty sure, it would be much more fun to play the original series)

I would also like to try the system, however I’m not familiar with the “old” star trek, so both eras are fine.

Would like to join, if it’s after the Eberron mini-campaign. Haven’t found the srd so far and hope that the rules are not too complicated. Would prefer Next Generation or DS9 (if that is possible at all). Kirk’s too much of a sexist for my taste.

… 5 player is already enough
maybe I’ll do a re-run? (no promises), also I keep you in mind, in case 1-2 players cannot make it

the main differences between The Original Series (TOS) and The Next Generation (TNG; which includes DS9 & VOY) eras are:

my plan so far, since @H is joining, is to play it on a Sunday

depends on the weather on that day

would pick the Sunday after Easter, 24.04. as a rough aim

… 5 player is already enough
maybe I’ll do a re-run? (no promises), also I keep you in mind, in case 1-2 players cannot make it

I will be on another game on the 24th (Simon will be back in town and already booked), so I can offer my place. Also I was the only one suggesting the TOS, so feel free to play New Generation.

. Kirk’s too much of a sexist for my taste.

Also I was the only one suggesting the TOS, so feel free to play New Generation.

if 2 or more cannot make it on that day, then I would shift the date

Edit: one single player slot left … if someone wants to join

He better run. Yeah, that playboy grew up, didn’t he.

In other news, unfortunately I can only play on Friday evenings and not on Sundays. So there’s a spot open again.

ok then online it is

For the the 24th would fit. How long the session will take about?

How long the session will take about?

I plant to give you pregens or make the char creation earlier via PM/Discord
(that’s actually pretty quick, although coming up with 4 Values [that are principles, that define your characters] can take a while) 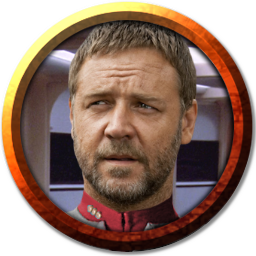 Captain Terrance Riley is a veteran of the Federation-Cardassian war, which ended with a peace treaty 5 years ago, where he recieved a battlefield commendation.
Serving Starfleet is a Riley family tradition. His father Kevin Riley served under captain Kirk before later joining the Diplomatic Corps. Terrance Riley signed up to Starfleet as a young cadet back then dreaming of exploration and first contact missions. One year ago, he got promoted to captain of the Intrepid-class vessel prototype and his first year of command was a dream come true for him.
Recent Galactic events though make him really worried, if such peaceful exploration missions would still be possible in the foreseeable future at all. He definitely has seen better days. He is troubled and sleeps bad lately.

Value: "Deeply cares for his crew."
Value: "Longs for the good old days."
Value: "The spirit of discovery."
Value: "We need to keep peace at all costs."
Directive: “Rules of Engagement!”

Defuse the Tension
Whenever you attempt a Task to persuade someone not to resort to violence, you may add a bonus d20 to your dice pool. 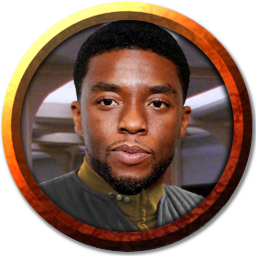 Commander Donald Kaplan is the Chief Engineer of the U.S.S. Intrepid.
He attended Starfleet Academy with Geordi La Forge, who currently serves on the U.S.S. Enterprise. Since that time, the two engineers had a friendly rivalry, regularly engaging in contests to see whose vessel had more efficient power conversion systems.
He has a younger sister Marie Kaplan, who serves as an Ensign on the U.S.S. Voyager, which recently has gone missing.

Value: "Great is not good enough, perfection is what’s needed."
Value: "It’s not broken until I say it’s broken."
Value: "Maybe you should try cleaning the plasma grid once in a while."
Value: "The drive for exploration."
Directive: “Rules of Engagement!”

When aboard the ship, the chief engineer always has the Advantage “Engineering Department”, which represents the ship’s complement of engineers and technicians.

Cautious: Engineering
Whenever you attempt a Task with Engineering, and you buy one or more d20s by spending Momentum, you may re-roll a single d20.

In the Nick of Time
Whenever you succeed at an Engineering or Science Task as part of an Extended Task, you score 1 additional Work for every Effect rolled.

Miracle Worker
You have a reputation of doing the impossible: repairs or modifications well in advance of expectations; getting offline systems up and running when most needed and so on.
Whenever you use Engineering on an Extended Task, if you achieve a Breakthrough and roll at least one Effect on a Challenge Die (A), you achieve a second Breakthrough. 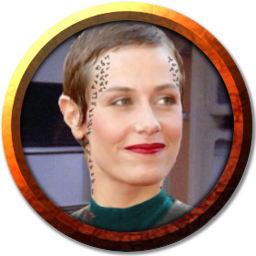 Chief Arida Ral is a genderfluid joined Trill, who has studied at the Daystrome Institute.
Since a Trill mentor helped them massively during their application for joining, they sometimes struggle, if they really deserve a symbiont: The Ral Symbiont has been part of several famous Trill scientists in the past, and is suprisingly filled with a lot of nostalgia somehow.

Value: "Even a 400-year-old explorer can find something new."
Value: "I won’t betray my ideals … yet again."
Value: "Living through four lifes, I realise what I’ve missed."
Value: "Safety protocols are optional when you know what you’re doing."
Directive: “Rules of Engagement!”

When the science officer succeeds at a Task assisted by the ship’s Computers or Sensors, or using a tricorder, the character generates one bonus Momentum, which may only be used on the Obtain Information Momentum Spend.

Applied Research
You’re a practical scientist, always looking to see how your knowledge can be put into practice. Once per scene, when you attempt a Task which relates to information you received earlier that scene from an Obtain Information question, you may roll an additional d20.

Joined
You have a symbiont, with lifetimes of memories to draw upon. Once per mission, you may declare that a former host had expertise in a relevant skill or field of study; you gain a single Focus for the remainder of the scene, as you draw upon those memories. Additionally, you gain a Trait with the name of the Symbiont; this reflects potential advantages of the Joining, the ability to perform rites and rituals to awaken past hosts’ memories, and the vulnerabilities inherent in the connection.

Rapid Hypothesis
You are quick to devise a working theory about an unknown phenomenon’s nature, origin, or effect. Once per scene, when you ask two or more questions using Obtain Information, you may immediately create an Advantage that represents your theoretical understanding of the subject of those questions.