She is basically a Silver Age Comic Book Hero in the Bronce / Dark Age of Comic books (and we all know how ridiculous overpowered Silver Age heroes were) and is a Mary Sue Trope Character played for laughs.

She started her career at age 14 trying to a be sidekick to Iron Man with her pet squirrel Monkey Joe. After politely declining her offer, Iron Man and Squirrel Girl were captured by Doctor Doom. However, Doom would become the first villain (out of many) to be defeated by her due to underestimating her power.
She managed to deal Doctor Doom the most inglorious defeat of his career:

Later she joines a group of misfit superheroes, the “Great Lake Avengers” (GLA). There Monkey Joe is soon killed by rejected GLA member Leather Boy in a Doctor Doom suit. She is soon partnered by Tippy Toe, her new squirrel sidekick.
With the GLA she defeates Maelstrom.

Later she defeates Terrax and A.I.M. including their leader M.O.D.O.K. all by herself …

…and is offered a position at S.H.I.E.L.D. because of the number of villains (Doctor Doom, The Mandarin, Giganto) she had beaten, but she declines.

On the same day she meets Thanos …

… which does not end well for him

(this whole episode is even more hillarious, since she just wanted to buy toilet paper and eggnog for a chrismas party).

Uatu the Watcher even confirms, that this was the real Thanos and not a robot, clone or simulacrum.

Deadpool later attacks the GLA, because he (falsely) believes they have not signed under the new Superhuman Registration Act.
Thankfully Squirrel Girl is there to beat him up.

Because “defeat means friendship” Deadpool then joins the GLA.
Together they fight against A.I.M., who can still remember Squirrel Girl and call her “The Anti-Life” and “Slayer of All That Breathes”.
(She then helps The Thing to defeat Bi-Beast)

Later Deadpool gives her a comic of the next issue, which is not yet for sale, so she reads what happens to her big crush Speedball.

Speedball is mentally crushed. Squirrel Girl wants to save him, so she goes to Latveria to get a Time Machine from Doctor Doom, who remembers her instantly.

Equipped with his Time Machine something went awry and she lands in an alternate future.
She later descides to travel back and realises that Deadpool terrorised the other members of the GLA. So she beats him up (again) and kicks him out.

… but after defeating Baron Mordo, Korvac, Ego the Living Planet and Fin Fang Foom she leaves the GLA herself, since the other members don’t do any crimefighting anymore, since she defeats all villians solo anyway (although the GLA wins the superhero team poker championship).

After a short trip to Disney Land, she enters NYC University and starts working part-time as a nanny for Luke Cage’s (Powerman) and his wife Jessica [Jones] (Knightress) baby daughter. 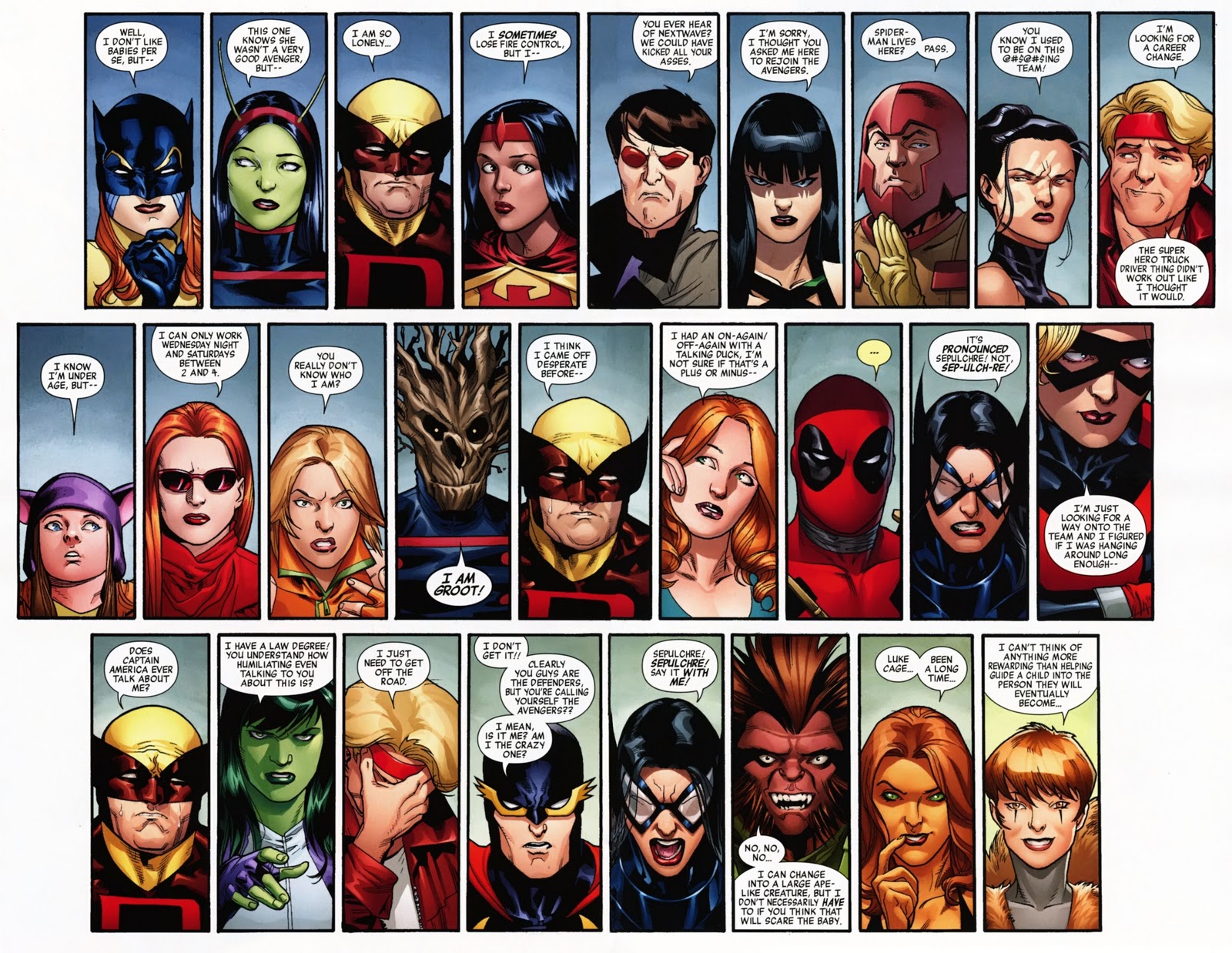 There she meets the other Avengers including Wolverine.
To crush any Wolverine-fanboy’s heart, it is even stated in the same comic that she and Wolverine share a history together:

It si later revealed, that she stopped him from breaking into a car

Later on that day she defeats Wolverine in a friendly fight.
(I mean, did someone seriously believe that Wolverine could have won?)

While being a nanny, she defeats troops of Sin’s nazi army and protects the baby during the lockdown of the Avengers’ mansion (while hitting on Daredevil, who is not happy, since it turned out his supersenses made him allergic to squirrels).

When Luke Cage (Powerman) and his wife Jessica [Jones] (Knightress) leave the Avenges with their baby daughter for good, Squirrel Girl leaves the Avengers as well and continues to work part-time as a nanny.

She is mentioned (only) in the Super Hero Squad Show. There it is said that she is secretly dating War Machine.

(That performance deserves an encore.)

meanwhile Squirrel Girl quits being a nanny and goes to University

This series is hillarious btw