Hey all @cat4laugh here. Dragonwelp has confused a shirt that one of our players was wearing for a different shirt. And accused people of being NeoNazis, this has been now resolved. We are keeping the post on here for archive purposes and as an example of why you should message the mods first before you embarrass yourself.

I would like to bring something to your attention. I recently discovered your forums and thought I’d stop by on a Friday to check out the open table games. As I was busy on Nov 18, I only dropped for a few minutes at the Zehnsiebzig Cafe that night before I had to leave for my other plans.

There, I saw something really concerning at the table in the back room, I want to bring your attention to:

A guy (dark half long hair, beard, glasses, small stature) wearing a hoodie of the band Wolfnacht (a greek Nazi Black Metal (see (1)) band), with clear insignia (Wolfsangel). If you google image search this band, you will unmistakably recognize the glorification of national socialism.

So, I went through the forum posts of that night and looked for user names potentially associated with such ideology. [Speculation removed by H. While I appreciate the sentiment, I would not wish to see anybody unjustly associated with something like this. User names can at times be deceiving.]

Make of that information above what you will. I am wondering what you think of this as a community and if you find this acceptable.

I am pretty certain, that the person in question will be reading this post too. I have a message for you:
Fck your beliefs and fck you for having them.

Thank you for bringing this to our attention, dragonwelp. I’m not part of the VALUE group, but I’ll speak with the appropriate people and see whether we can get to the bottom of this.

And no, this sort of thing is not acceptable. At all.

Hey Dragonwelp,
First and foremost Nazis are never acceptable in any way shape or form and we will look into this.

However last time I checked

x Is a bald IT guy turned Teacher, and he is pretty tall, and has been nothing but kind at my tables. So you are definitely already off with whom you are looking for.

As far as I am aware Ted was running the table last week so I will be in contact with him for further questions. But please refrain from posting any theory crafting and accusing people until we have facts…

I’ll clarify a bit because I think this is a very clear misunderstanding and I think I know the person in question as I was at that table.

First of all, the person with the username X wasn’t present in the table at the backroom. So that in and of itself is a little questionable.

And secondly, the only band shirt including wolves at the table was of the German heavy metal band called “Powerwolf” who had played a concert in Vienna just the night before.

Despite not being a big fan of metal I attended said concert and listened to a large part of Powerwolf’s discography. Now, from the lyrics of the songs themselves I cannot see any kind of Neonazi symbolism connected with their music and symbolism.

As I said I think this might be a misunderstanding, but I know the person in question. Let’s clear this up, yes?

Apparently, some people saw speculation about who this person might be before I was able to nix it. Since I don’t think any of us would like to see anybody falsely associated with this sort of thing before we truly know what’s going on - and it does seem as if the person originally mentioned has nothing to do with any of this - I have removed the name in question from various posts.

Nope, this was not a misunderstanding.

I didn’t recognize the band, just the symbols. So, I had to research it before posting here. If you are suggesting I did not remember correctly, I have to disappoint you.

It was not Powerwolf. I like Metal a lot and I know Powerwolf. This wasn’t it.

Hi Dragonwelp. Welcome and thanks for reaching out and creating this topic.

As has already been made clear, wearing clothing depicting these kinds of symbols or any type of behavior relating to it is not tolerated in any way in this community.

H was correct to remove any speculation as to who the person could be. I would suggest that we stay vigilant and if anyone is seen wearing such symbols in future, they should be reported to a member of staff as soon as possible. Whether that’s in 1070 or elsewhere.

Would that be an acceptable course of action in this case? 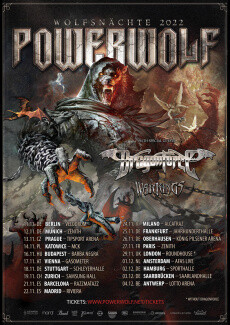 Hey Dragonwelp,
The band Powerwolf has a tour called Wolfsnächte. However they are not associated with the other band. It seems like some unfortunate naming Scheme. One of our players wore a shirt with these tour dates on the back, that’s probably where the confusion came from. Please reach out to us in DM’s first in the future instead of spreading panic

I think you were talking about me? Typically I don’t wear a beard, but it might have that I was not shaved this friday. The shirt I wore was indeed from the heavy metal band Powerwolf, one of my favourite bands. I visited their concert on thursday, their tour is called “Wolfsnächte”, and bought the shirt there, it was their limited Vienna edition. It has a wolf knight carrying the Austrian flag on its front:

On its back it has the tour name, an Austrian flag and one with Powerwolf’s logo:

I did not even know that a band “Wolfsnacht” exists until I saw that post, and I am by no means a neonazi. I am studying law, I know exactly how illegal that would be and how long one would have to go to prison for that

As Cat already said, next time please reach out to RPGVienna moderators and DMs instead of openly accusing someone of something like that.

PS: I am sure I am not the only one who plays D&D and also likes Powerwolf (and Wind Rose, Sabaton and similar bands)