OVER THE EDGE (Online OneShot)

Welcome to Al Amarja!
During your stay with us, please remember that Liberty is Job One, Disarmament Means Peace, It’s Polite to Speak English, and, of course, Paranormal Activity is perfectly legal.
Thank you for your consent.

… is a rules-light RPG about weird conspiracies in a surreal banana republic island state.

Player characters will be new arrivals, who have traveled to Al Amarja to visit the 108th annual cryptozoology world congress … which is extra nice, since this island seems to be the only place in the world, that has not been hit by the pandemic somehow … (maybe that’s why they picked this location) 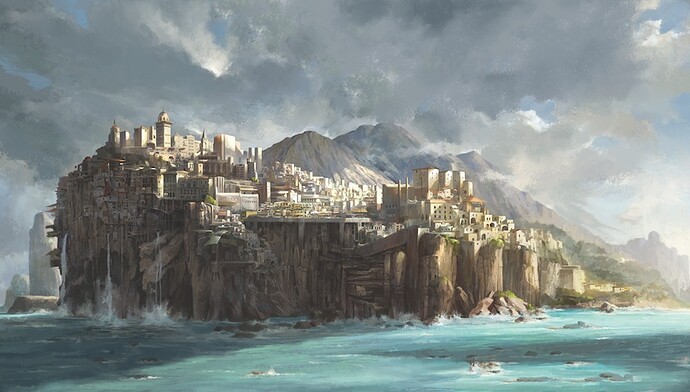 what you would need:

how long this will take: 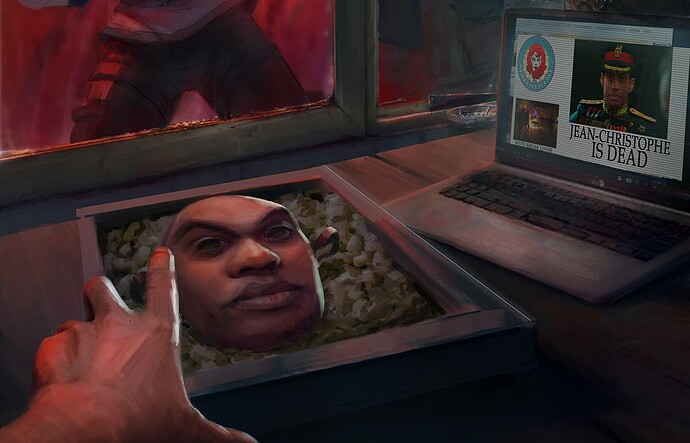 Think about a concept, what you want to play.
No need to write it down, but it helps you to fill out the other stuff mentioned below.

What is your character’s name?

Now come up with something broad like a job description. This basically covers stuff your character is able to do with a quality level of a professional in that field.
e.g. assassin, ex-swat, guru, spy, spiritual healer, tourist, zen coder, …

After that come up with something specific like a hobby, what your character can do as well as a professional.
e.g. animal-lover, blogger, hacker, history-nerd, jet-skier, kickboxer, makeup-artist, wikipedia-editor

(note: every PC is at least competent in fighting and swaying, even if no trait applies)

Now think about what personal challenges your character should face.
This should be an adjective … and will be noted as [adjective]-?
This adjective is true … but the -? is there to signal on the meta level that this fundamentally true thing might cease to be being fundamentally true during play.
e.g. faithful-?. honest-?, innocent-?, rich-?, sane-?, self-confident-?, trusting-?
A good example for this would be Indiana Jones.
He would be brave-? … so he is totally brave until we find out he is afraid of snakes.

This is is what lures or provokes your character into doing unwise things from the perspective of the game world that are constructive or exciting for the players. It’s your excuse to do things that are fun instead of pragmatic.
e.g. brags and says too much; takes risks to help an innocent in danger; …

Why has your character traveled to Al Amarja?
We all know that there is this 108th cryptozoology world congress …
… but why is your character really here?
(write this down secretly)

Take a look at all those things, you have selected earlier and write down a few “tells” how your character looks like.
e.g. a character with the Linebacker trait is built like a linebacker, an Ex-Bassist Rockstar has a glam style in hair and dress, a Pro Gambler is missing some pieces of their fingers due to certain debts that went unpaid, a Hacker is always wearing AR glasses, … 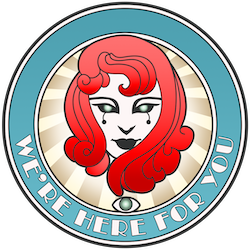 Looks interesting. Count me in. 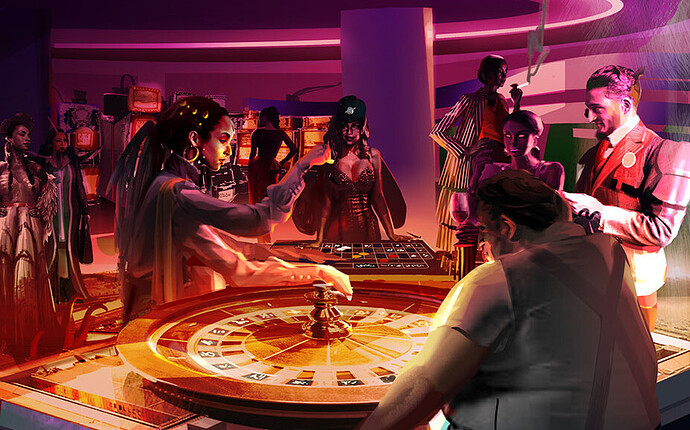 If you are generally better at something, than your opposition,
(e.g. a professional burglar tries to open an average lock)

you will gain one or two re-rolls
(in case of two, one is rolled after the other).
3s & 4s cannot be re-rolled this way!

Should the odds favour your opposition
(e.g. a competent burglar tries to open a safe with a masterful lock)

the dm can force you to do one or two re-rolls
(in case of two, one is rolled after the other).
3s & 4s can also not be re-rolled this way!

The levels to gauge, who gets to choose the re-rolls are:

Advantage/Disadvantages just modify your and/or the opposition’s “Level” on this track.
Level difference grants one re-roll per gap (either to the PC or the dm).
Checks where the “Level”-difference is 3+ are automatic successes/fails without any roll.

In addition … any Check made “Without Initiative” / as a “Reaction”
e.g. dodging an incoming car, evading an attack, passive perception, …

Also if you have prepared for something specific,

… that is a shared luck-point for all players.

You regain Karma for your group, when you had none and either change the setting significantly for the better, or roll doubles on any check.

You cannot store/stack Karma … either your group has it, or they don’t.

p.s. note that this includes house-rules 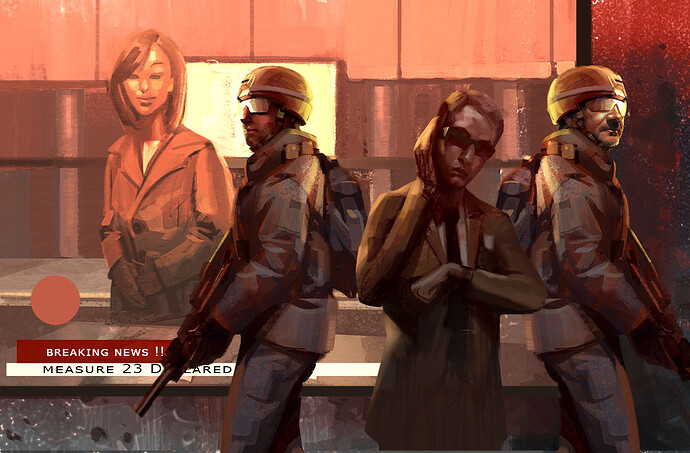 Everytime you get scarred, does not matter whether this was physically or mentally or otherwise,
you note that you have been "STRICKEN"
and describe how that visually affects your character.
e.g. bruises, looks ill, mad eyes, …

Should a player character have 3 strikes, they are out
… they could be dead, unconscious, insane, imprisoned … depends on the circmstances
If your character has less, than they are fine
(so there are no “wound-penalties”).

If I don’t last minute work/gig I’ll be there!

One of the craziest settings ever!

Yes, I’m totally in. (A slightly later start might be a bit easier to swing, though. I’ll try my best.)

This is going to be cool. Thanks for running this!

since character creation is pretty fast, we can also do that at the start of the game
(having a concept what you want to play at that point does not hurt though).

If you have any questions, feel free to ask.

p.s.: Should you already know, what you want to play, you can also post your PC here.

Sounds really interesting. Count me in.

@irx
@K-the-fox
@PatrickD
@ThatGuyTed
… as well as @H , who will join us later at a dramatically appropriate moment

so … unless one or two are canceling … THE CLUB IS FULL 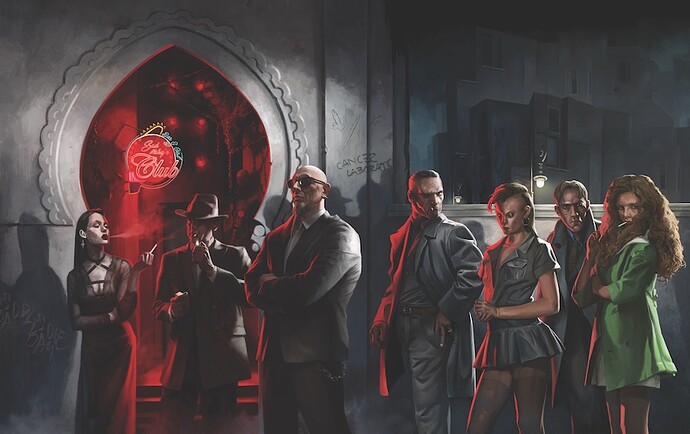 see you in Al Amarja

Okay I think I’ve got my character:

Trent is a -confident? (fake) swole-omancer, who loves to go free diving. The fact that he actually can’t predict the future coupled with his conviction that he can, tends to get him into trouble.
He usually wears a tank-top with swimming trunks, sunglasses and a shark-tooth necklace.

Okay here is mine hope it’s not too much:

JR Blowfield is a trusting-? data analyst who is also got some experience in capoeira.

Trouble: There is nothing more important for him to contribute to a better world, any promising approach he would try to follow.

He is bold very well shaved with a black suit, white slim-cut shirt and certainly no tie. He is wearing sun classes but how often he touches them they probably also contain a build in AR function. For an unknown reason he is also wearing a white plush puddle on his arm which he regular pets.

@K-the-fox
Becci is a confident-? wanna be detective working as a barista (all the best clues come from people buying coffee…). Her main hobby is eavesdropping, so much so she thinks everyone is hiding something. Due to her ability to connect all “clues” together and her desperation to prove people are up to something, following her hunches lands her in tricky situations.
She has died purple hair cut above the shoulders, huge round normal glasses, ripped skinny jeans and a grey T-Shirt with Mothman on the front - aka classic hipster.

@irx
Walter Hayes is a principled-? journalist in his late fifties, whose favourite pastime is his collection of venomous spiders. He is completely oblivious, that after consuming the slightest amount of alcohol, he can speak nothing but the truth. He usually can be seen wearing his dark brown tweed jacket and a pair of horn-rimmed glasses.

maybe we will revisit the island one day
(but as mentioned def. not next month)