Who’s around this week?

I’ll be there and could run something if desired. Grimm, perhaps?

I can’t be there, I am committed to a session zero for a new 5E game. But I really, REALLY, want to play Grimm. Do you think there’s any chance of you working out the wrinkles this time, and running it again? I mean, I REALLY want to play Grimm.

I should be there

We would be there, count 2 more people for Grimm

I will join well, just need to disengage from another event before that but should be there by 8 or so.

I’ll be coming tonight, too.

No problem, we can easily postpone Grimm. Not sure what we’ll play tonight instead; perhaps an appetizer followed by a main course. Or maybe even a platter …

All right, if nobody objects too strongly, we’ll do something a little different tonight: we’ll collectively author a crime anthology.

Several different systems, a variety of crimes. Something like those old Hitchcock collections, perhaps: 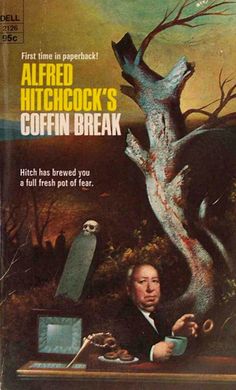 What was the address of the spielbar, please

Apologies for not turning up yesterday, work got in the way. Hope you had a great time with Alfred & Co.!

That sounds awesome, too. WHY CAN’T I CLONE MYSELF? And then remerge the clones, of course. Otherwise it would be pointless, they’d just be other people. I DIGRESS. I hope y’all had a great time.

No worries. The games were fun, but I’d like to try them again with slightly larger groups, so a re-run may well be in the cards.