"I Learned About DM-ing From That..."

Following a post-game discussion last Friday with @PatrickD and @BufoBufo about picking up DM’ing and game-running tricks from a broader range of sources I wanted to ask the floor what has helped you become a better DM?

For me, it was “The Watch Tower” which was pitched as a Buffy the Vampire Slayer spin-off by the BBC - what I took from this was using TV serials as good sources for pacing; stealing all the standard 45 min episode tricks by framing up exposition as vignette pre-credit sequences; teaser-trailers and other short, snappy bits letting the players get a quick look into the world beyond them without info-dumps.

Write-ups for 7 seasons can be found on rpg.net:
https://forum.rpg.net/index.php?threads/actual-play-buffy-the-watch-house.84440/

By season 4 the format has really crystallised:

Following a post-game discussion last Friday with @PatrickD and @BufoBufo about picking up DM’ing and game-running tricks from a broader range of sources I wanted to ask the floor what has helped you become a better DM?

Run something. Think about what went horribly wrong on the way home. Scream. Attract odd looks from passersby. Repeat.

(Skip the ‘on the way home’ part while playing remotely during times of covid, obviously.)

Eearly on was inspired by movies like ‘Conan the Barbarian’, ‘Excalibur’, ‘Lord of the Rings (the cartoon’,‘Princesses Bride’, ‘Monsters and Mazes’, ‘Legend’… they had good content. Didn’t help me much with DMing though, but at that time more like provided inspiration for prepping my own adventures (which at that time were not so readily available)

Today, maybe Mythica movies serial could be useful in terms of world building, running games, very cheesy, nothing new or very entertaining, but not too terrible either :))

Run something. Think about what went horribly wrong on the way home. Scream. Attract odd looks from passersby. Repeat.

also … as always communication is key!
talking & trying to better understand your fellow players is super important
(e.g. asking what type of movie they want to play, asking for constant feedback, Session 0, setting-handouts with pictures to set the mood for the adventure, …)

Guy from ‘How to be a great GM/DMm (and Player)’ has a plethora of advice and great tips from which any DM or Player can benefit.

experience and player feedback for the most part

i did start watching videos from the “well known” youtubers that are touching the subject - including “How to be a great GM”, “Taking20”, “Nerdarchy” and others - but personally don’t agree with everything they say, but that’s alright as this - just like everything - comes down to personal preference

experience and player feedback for the most part

It is really interesting to see the sources people draw on for the ideas to test at the table in the first place - before you get to the point of trying and getting feedback. I see films, books and online ‘how-to’ videos so far - has anyone lifted ideas after sitting in other tables as a player?

What helps me a lot is playing with lot of different DMs. At the end it’s all about developing your own DM style. Some player/DM love battle maps some don’t same is true for handouts. Its confirms also what @Tersidian said, not every idea that you see in a video works for you. My recommendation also not try to implement all the ideas at once. Just take an element that resonate to you and see how the players at the table like it.

A bunch of my old friends-&-family are also dm-ing,
but in the early years this lead more to an identifying everyones strengths and polishing those.
(e.g. one was better at dm-ing Die Hard movies, another at running social adventures in bottled settings, …). Copying “what worked” in other groups was present, but less common at the time.
This might be also a result of having several dms available back then.

Nowadays this transformed into having a bunch of dm-advisors at one’s disposal^^.
e.g. When I wanted to run an anti-war rpg-campaign a while ago, I knew a dm, who is excellent in running military-campaigns, to ask.
So the learning from other dms/groups is far more common now.

Typically when planning a campaign, I tell at least one fellow dm the plot & ask for feedback.
Even if they wouldn’t have been able not give me advice, having “told it aloud once” helps.

Only speaking for me …

My modus operandi has been getting the idea first and researching material for it later.
This includes choosing a rpg-system that fits the narrative best.
e.g. To stay at the example above … watching a bunch of anti-war movies, reading some articles, talking to vets and using FFG`s WH40K. ^^

(The downside to this is, that it is super difficult for me to fulfill “please run a XYZ adventure” requests.)

I definitely pick up points I like from different DMs…especially when it comes to organizing gameflow. For example I like Tersidian’s inititive method, Sam’s concentration lights and so on. I also like when a DM has developed his/her own style and when they try to build stories together with the players. However I don’t try to copy the way they DM, but I do try to adopt what I like, to my own DMing and my own capabilities.
Obviously players and player feedback is important, and while DMs should embrace flexibility, tolerance, and not be one trick ponies I also acknowledge that they can’t meet everyones expectationa especially on AL type games where groups often vary. One can validly argue that variation is good for practicing.

I definitely pick up points I like from different DMs

I’ve seen from @H, you need have to write a few words on the back of an envelope/shopping list or from @Simon that players should suggest three words to make a great game and many similar tricks from our other DMs.
I’m pretty sure these are the single things on what great DM-Experience depends - but I still cannot reproduce the result. Maybe my envelope has a wrong size?

Jokes aside, this is a great thread

Two sources for technique that I have found useful in the past ~ 2-3 years (since the renaissance in tabletop) has been Sly Flourish and his ‘Lazy Dungeon Master’ checklist - great for making the best use of a DMs time (and for me, stopping myself writing whole worlds that no one will ever come across)

An intro/summary video of his recent book captures a good overview of his 8 step checklist: 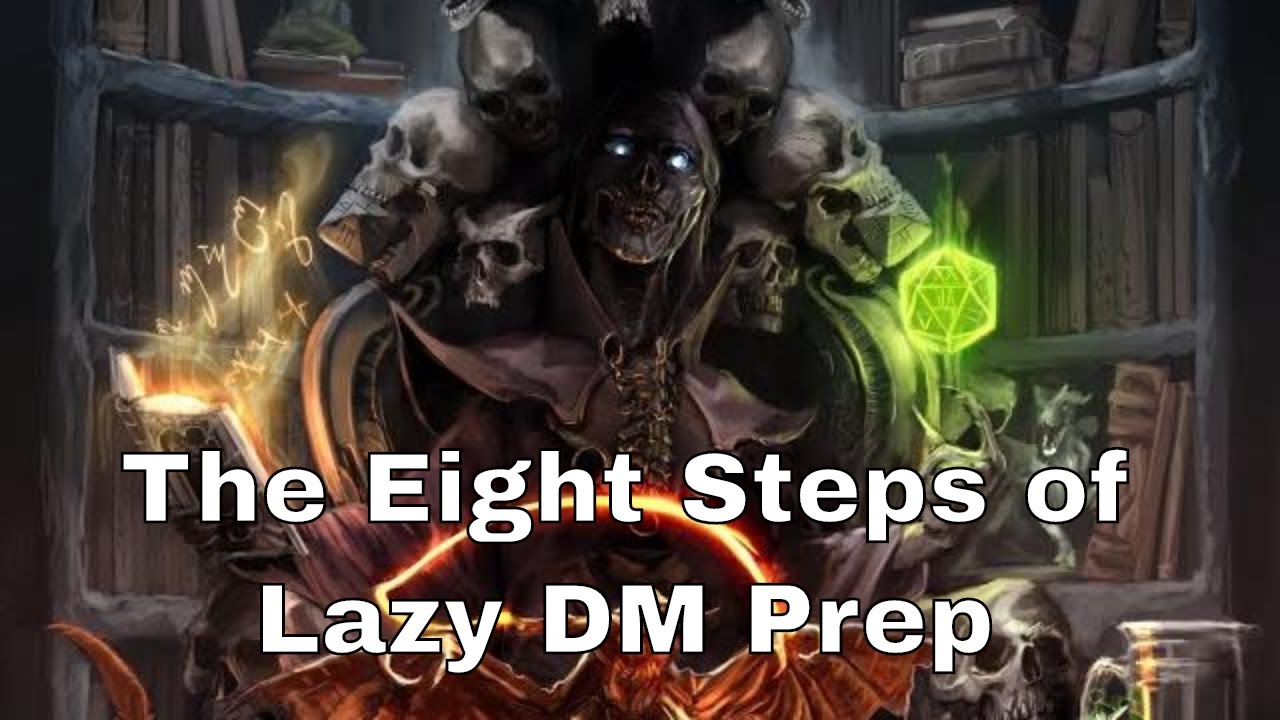 Then for deeper theory of ‘smart prep’ I find the Alexandrian is good - pretty crunchy, not a quick read but drills down into lots of hows and whys.

Go to Part 1Smart prep is generally about targeting the highest value prep while seeking to avoid prep that’s wasted (i.e., never used at the game table). Maximum bang for your buck, in other word